Hiscox Ltd (LSE:HSX), the international specialist insurer, today issues its trading statement for the first nine months of the year to 30 September 2019.

Bronek Masojada, Chief Executive Officer, commented: “The third quarter has been an active period for claims, with the market experiencing significant catastrophe losses from storms in the US, the Caribbean and Japan. Paying claims is what we are here for, and we have reserved $165 million for claims from Hurricane Dorian and Typhoons Faxai and Hagibis. We expect an additional impact from lower fees and profit commissions.

“It is pleasing to see good growth across all of our segments, with Hiscox London Market leading the way as conditions continue to improve. In Hiscox Retail, growth is accelerating following the decisive action we have taken in the US and UK, and Europe is delivering strong double-digit growth. We are on track to meet our full year growth guidance for the retail segment.

“Yet again the balance between our retail and big-ticket businesses has given Hiscox resilience in the face of challenging events. From these challenges comes opportunity.”

Claims
The Group experienced an active claims environment in the third quarter, as the market was impacted by major natural catastrophes for the third consecutive year.
Based on an insured market loss of $8 billion for Hurricane Dorian, $10 billion for Typhoon Faxai, and $15 billion for Typhoon Hagibis, Hiscox has reserved net $165 million to cover claims resulting from the three events, which is materially in excess of the Group’s catastrophe budget for the second half. In addition, fees and profit commissions are expected to be approximately $25 million lower at the year-end.

There is still a significant degree of uncertainty around the industry losses, particularly for Typhoon Hagibis where widespread flooding took place. The estimate is within the Group’s modelled range of claims for events of this nature, which were updated following the experience of the market last year. Exposure to the Japanese windstorms is primarily through Hiscox Re & ILS, and losses from Hurricane Dorian are contained mostly within Hiscox London Market.

The Group is exposed to the recent wildfires in California, however at this early stage the size of any potential loss is not yet clear.

Hiscox London Market has also experienced a higher number of large losses, with claims totalling approximately $30 million in the US public company directors and officers’ (D&O), property, marine and energy and space portfolios.

Like many others in the market, Hiscox is experiencing increased claims activity in some US casualty business. As noted in the July trading update, the Group strengthened reserves for private company D&O underwritten by Hiscox USA. While the vast majority of lines are performing in line with expectations, the Group is taking an increasingly cautious approach, both to prior year reserve development and current year loss picks in anticipation of higher claims.

In aggregate, the Group expects to experience a small positive reserve development for the year.

Rates
2020 is poised to be the third consecutive year of rate improvement in the London Market, as the performance management initiatives enacted by Lloyd’s continue to drive market discipline. For the nine months to September, rates are up approximately 9% across the Hiscox London Market portfolio, with the most significant increases in US public company D&O, cargo, general liability, marine hull and major property.

In Hiscox Re & ILS, rates are up approximately 6% across the portfolio, although much of this has been confined to loss-affected accounts. In the retrocession market, reduced capacity continues to drive material rate hardening and we are being opportunistic, and in California wildfire liability, rates have also increased materially following several active years for losses. In catastrophe business, rates have stabilised.

In Hiscox Retail, rates remain broadly flat across the portfolio, with pockets of positive momentum. In the US, rates are up between 2-5% as the market begins to respond to social inflation which is occurring in some casualty lines, albeit this is expected to take some time to filter down fully to the small business insurance market. In cyber, rate pressure continues due to an abundance of capacity, with the market yet to recognise increased claims activity.

In the UK, rates are broadly flat across the portfolio, with pricing improving in household lines as the market reacts to claims trends.

Markets have continued on their bullish path so far in 2019, albeit at a slower pace in the third quarter. The S&P 500 is up almost 20% for the first nine months of 2019, which is a bellwether for the performance of the Group’s risk assets. In the US, interest rates have been cut and bond yields have continued to fall. As a result, the Group has reported further strong mark-to-market returns on the Group’s bond portfolios, however the underlying rate of income generation is falling. This means the Group expects a strong full year investment result for 2019, with a weaker outlook for 2020.

The Group’s investment strategy remains broadly unchanged. With economic and political uncertainty an on-going feature in many parts of the world, it appears likely that bouts of market volatility will continue and the Group will remain conservatively positioned. 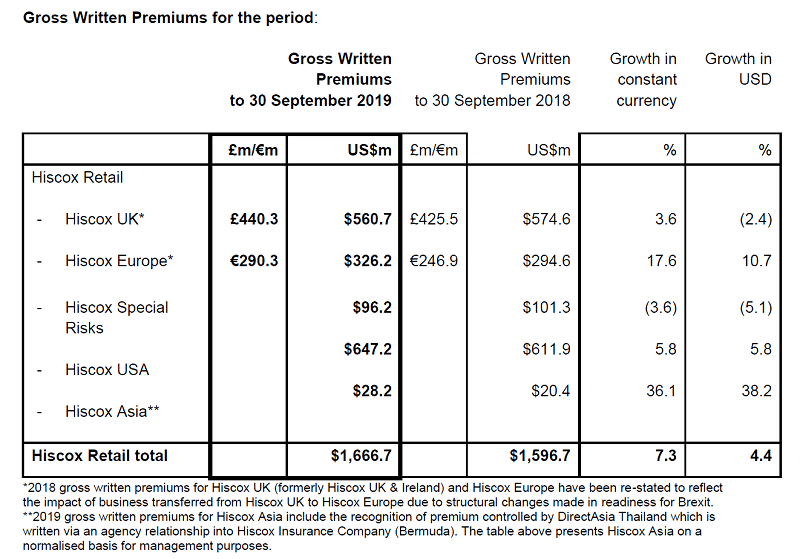 The broker channel is making good progress, with underlying growth accelerating and service standards continuing to improve as the business emerges from the implementation of a new IT system. Good growth in commercial lines has outweighed reductions in household business, where action taken to increase pricing in response to claims trends in the market has impacted customer retention and new business growth.

Direct commercial is driving double-digit growth in the direct-to-consumer business.

Hiscox Europe
The standout performance from Hiscox Europe has carried on into the third quarter, with the business growing gross written premiums by 17.6% in constant currency to $326.2 million (2018: $294.6 million), driven by particularly strong growth in commercial lines and cyber. In Germany, the business is benefiting from additional investment in marketing and distribution, with new offices in Berlin and Stuttgart now open and delivering good growth. The business is seeing increased competition in the small commercial segment, including cyber – where Hiscox maintains a leadership position.

Benelux continues to deliver impressive above-budget growth, with commercial lines and cyber the main drivers. The Netherlands will introduce a direct-to-consumer offering in 2020, and new partnerships are expected to contribute good growth next year.

France and Ireland are meeting growth targets while taking necessary corrective action within their underwriting portfolios.

Hiscox Europe continues to make progress delivering online broker portals across the region. The European business is preparing to implement a new underwriting system, a project which will commence in 2020 with a phased roll-out beginning with Germany.

Hiscox USA
Hiscox USA is returning to a more recognisable growth trajectory, having grown gross written premiums by 5.8% to $647.2 million (2018: $611.9 million), with growth for the third quarter returning to double-digits and trending positively.

In the broker channel, the planned retrenchment in private company D&O and media remains on track.

The direct and partnerships division continues to deliver impressive growth, benefiting from increased marketing spend, with partnerships performing particularly well. Work is now underway on the implementation of a new policy administration system, which will enable the direct-to-consumer business to scale in the long term.

As mentioned previously, the business is taking action in anticipation of worsening claims trends in casualty business across the market, where so-called social inflation is causing dramatic increases in jury awards and defence costs which is impacting claims severity.

While the effects of these trends are moderated somewhat given Hiscox USA’s focus on small and micro business customers, there is nevertheless a ‘trickle-down’ effect which is emerging in some target segments. To address these trends, the business is taking action in underwriting and claims management. There is also evidence of rate improvement in commercial lines as the market responds to these claims trends, which will mitigate some of the impact.

Hiscox Special Risks
Gross written premiums for Hiscox Special Risks were down by 3.6% in constant currency to $96.2 million (2018: $101.3 million), although this figure is impacted by the recognition of multi-year policies. On an underlying basis the top line was flat.

Conditions in the core kidnap and ransom market remain challenging, with increased competition and pricing pressure. However a continued focus on strategic underwriting partnerships worldwide is making good progress. The Security Incident Response (SIR) product continues to perform well and further investment in marketing and distribution is expected to increase penetration in key markets.

Singapore is seeing strong growth in partnerships, with a dynamic digital marketing strategy helping the business to combat increased competition in car and motorbike insurance.

Thailand has achieved good new business growth, benefiting from a strong focus on sales conversion and a refined marketing strategy.

Growth has been most pronounced in the areas of greatest rate improvement, driven by the Lloyd’s Decile 10 directive which continues to promote market discipline. The business has achieved good growth in many core lines including marine hull, major property, general liability and US public company D&O – the latter where rates are up over 60%.

Hiscox London Market has experienced losses from Hurricane Dorian in the household and commercial binder books, where Hiscox underwrites some Caribbean property through US coverholders. The business also experienced a higher number of large losses in the quarter than normal.

Like others in the market, Hiscox London Market has been impacted by increased attritional losses in property lines, predominantly confined to the household and commercial binder books. Action has been taken to re-underwrite these portfolios, however due to the nature of the binding authority agreements with coverholders, the benefits of these actions are not expected to flow through to the bottom line until next year.

Hiscox London Market maintains a lead position on consortia for general liability, flood and product recall which, in addition to the ability to underwrite on behalf of third-party capital providers – including through the Latitude ILS fund which was launched earlier in the year – provides scale and prominence with brokers and customers.

2020 appears set to be the third consecutive year of rate increases in the market, with rates in aggregate up 20% on a compound basis since the market lows of 2017. As a result of action taken over the last few years, the portfolio is in good shape and Hiscox London Market is well positioned to make the most of opportunities as they arise.

Widespread rate improvement is still hampered by the fluidity of reinsurance capacity available from traditional and alternative sources. Parts of the market are responding, and there is selective positive rate momentum, though generally confined to lines hardest hit by losses, such as retrocession and wildfire liability. In many areas however, rate is currently insufficient to warrant increased participation.

In this environment, it pays to be disciplined and nimble. Hiscox Re & ILS will grow cautiously where opportunities present and contract where the rewards do not match the risk.

Hiscox ILS assets under management remain in excess of $1.5 billion, reflecting the impact of significant losses over the past two years.

About The Hiscox Group